Built between 2004 and 2010 in over 480 units, the Dufour 365 GL is one of those sailboats that can boast of an impeccable career. Sailor, fast and comfortable, this plan Felci is a safe bet on the second-hand market. We we unearthed a very well-maintained specimen in Crouesty harbour.

“IT IS A FANTASTIC SAILBOAT in every way”, confides the owner of this magnificent Dufour 365 GL with a sigh of regret. It is true that Le Dilecta III presents itself well under this spring sun. In the company of our expert Sébastien Viant, we take a close look at this beautiful airframe. We are immediately struck by the accuracy of its balance with its reasonable main beam. The slim water intakes and this classic keel (this is the deep draft version) extended with a T-lamp were praised during the presentation at the Paris Motor Show in December 2004 and then awarded the title Sailboat of the Year 2006 the following autumn. .

The Dufour 365 GL is part of a blessed era for the La Rochelle shipyard then managed by Salvatore Serio (the former Grand Soleil boss) who had put Dufour back on the track for performance. Three years after the Dufour 40 (Sailboat of the Year 2003) and the launch of the powerful Dufour 34 and 44, the yard wanted to confirm the accuracy of the architectural choices made by Umberto Felci, associated with Patrick Roséo for the interior design, on models entirely dedicated to cruising. The 365 and the 455 had to become the quieter versions of the 34 and 44, while the 385 wanted to keep the big German competitor off…

MAINTAINING A FIRST HAND WITH LOVE

But back to Jean-Paul Delessard’s 365 Grand Large. How did he get older? Save for a minor English mishap caused by a stranding in the mud at the entrance to the Falmouth River under the lightly mocking gaze of our friends from across the Channel, Jean-Paul Delessard suffered no major damage on his many summer sailings. And since it is a first hand car that is maintained with love and scrupulousness by the master, this should logically reassure potential buyers.

The live works seem solid at first glance and the short tour with the expert will confirm this diagnosis. Every year an antifouling has been applied – a fresh coat of black color had even just been applied at the time of our visit – but with no systematic return to the coating. For gliding enthusiasts, this means a good sanding job to find a perfectly smooth hull. As a result of these multiple coats, a few mini-patches of anti-fouling paint here and there tend to get lost, but not really a problem!

No crack on the side of the keel seal to sink your teeth into and not the slightest degradation or trace of impact at the bulb level. If there are light corrosion spots on the keel fin

in cast iron there is no disturbing proliferation. As for the through hulls, they did well in the knife tip scratch test: the bronze came back immediately after two or three strokes of the pocket knife.

At the stern, the trailing and leading edges of the rudder are free of cracks, while the profile, especially where the steel stock is fitted, which bears a large part of the forces, shows no deformation. Only minus is the existence of a play in the handling of the shovel which suggests that the rings should be replaced soon.

A BOW SCREW FOR MANOEUVEN

Continuing our inspection of the hull, we are challenged by the presence of a bow thruster. On such a small unit, the legitimacy of such equipment is questionable, but according to the captain, this so-called tunnel system is reliable and very practical for getting out of the narrow disturbances of the port of Crouesty.

The other side of the coin, its maintenance must be impeccable. We note, however, that some shells have found a cozy bed not far from the propeller and that the anode, even painted – it should not risk losing its sacrificial strength – is corroded because it has not been replaced for two years. The same care for the inboard sail drive, even with the seal fitted (last change in 2014), the functional two-bladed propeller and the perfectly clear water intake inlet. 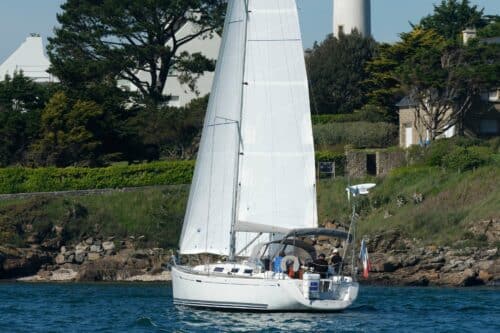 Above the waterline, we find the same concern for rigorous maintenance. The skirt presents well, no impact is visible, only the seal (still in place) seems a bit pricked with moisture in places. In short, nothing to complain about… The white gelcoat of the planking is also in its favour: no chalking in sight. The hull has been buffed and polished at every annual refit and it shows! If the trim has lost its luster over time, it will still remain aesthetically very fair except for the one closest to the waterline.

There are indeed a few scratches and other scratches on it. Finally, the bow well protected by its fittings and a special fender does not have to be ashamed of the test of time. Time flies by at high speed and the port handlers force our hand a little to get back into the water. For them it is a matter of sticking to a very tight schedule after the cockpit. In any case, this dry inspection made a very good impression on us. It remains to test this beautiful sailboat in its element!

A ROYAL ANCHOR IN BENIGUETS

the favors of the sun star that we decide to go to the beautiful island of Houat to enjoy the pleasures of a fairground anchorage in the bay of Béniguets. When entering this Dufour 365 it is hard to miss this teak covered deck with the most beautiful effect.

It does not show peeling or mildew spots. Again, the owner has gone to great lengths to keep it in pristine condition. Fitted with 2018 refurbished cladding, the deckhouse sprayhood and sparkling mainsail cover add to the overall good performance coming out of this neat sailboat. Ditto for all the fittings that include two Harken gear winches size 40, two piano winches of the same brand in size 32 and two sets of Spinlock blockers on either side of the descent. The genoa plates are new while the running rigging was changed in 2017 and the frame was completely overhauled that same year.

Another good selling point! The salvage maneuver is a simple formality where this rudder goes up to 1.70 m deep in connection with the bow thruster. Well guided by the 30 hp Volvo engine we are already out of the canal ready to go sailing. Battened mainsail and beautifully designed furling genoa (the sails are from 2020) are rolled out at walking pace. In a light breeze, we lurk close to the wind to create a little apparent wind.

After a calm navigation of 9 miles, the bay of Béniguets already looms at the end of our bow. This wild cove, which is quiet out of season, is surrounded by majestic rocky islets and will serve as the backdrop for our lunch break. A tap of the electric windlass and the CQR anchor lands at the bottom of the water, soon hooked into a solid sand. After our sandwiches have been swallowed at high speed, we opt for a digestive walk ashore. 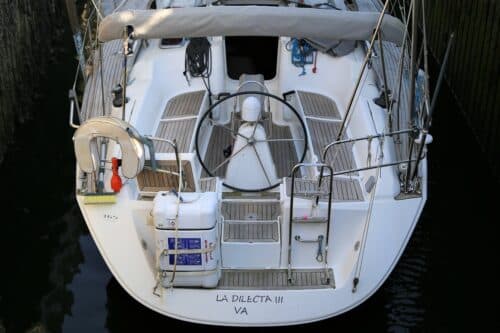 The dinghy, stowed in one of the two good lockers in the cockpit, is quickly ready for use thanks to the use of an electric pump connected directly to the engine control panel, which is practical! In addition, the use of the small skirt, on which the liferaft is attached, is ideal to facilitate passenger transfers, while the small cockpit shower allows you to rinse your feet when you return from the beach!

Back from our exploration and as a light afternoon temperature rises gently, we head below decks in search of slightly warmer things. Always accompanied by our chief expert, we discover an interior layout that could not be more classic for a cruiser of nearly 37 feet. At the rear are two identical cabins with fairly spacious double berths and well equipped in terms of storage capacity.

Back in the open air, we will end this beautiful day by going as close as possible to the tip of Port-Navalo for the photographer’s needs. The opportunity to appreciate the fluidity of the maneuvers and the smooth operation of this sailboat decidedly well built, pleasant to sail and perfectly maintained. “Pure happiness” promised the boat’s launch brochure. Sounds like a kept promise…