Goal by Olivier Hinse in the 3rd period

(Jean Doyon) – The Sorel-Tracy Sparrowhawks ended a three-game loss streak by winning 7-4 tonight at the Colisee Cardin in front of just over 800 spectators on Thursday night. Except that the score doesn’t really set the pace of the encounter, as Christian Deschênes’ men had a very poor first period, an excellent 2nd, and masterfully managed to get out of trouble despite the end of the game. punish them.

St-Georges’ COOL FM for its part improved its success rate on power plays as 3 of COOL’s 4 goals were scored with a man’s advantage. The 2nd period was expensive for them, the Sparrowhawks had the knife between their teeth with 3 unanswered goals, and a net result of 18 shots on target against 3 against them. In the 3rd, Serge Forcier’s players played well adding two more goals, but the Sparrowhawks clearly wanted to win this game.

The nets were protected by Marc-Antoine Gélinas on Sorel-Tracy’s side, while Raphaël Girard was in front of Cool FM.

Les Éperviers showed a rather miserable attack in the first period, while COOL FM appeared to be confident in their resources. With 15 shots on target against 10 in favor of Serge Forcier’s men, St-Georges took the opportunity to win, thanks mainly to two goals on power plays.

Michael Rhéaume, well positioned at the end, opened the score with a perfect shot on an intelligent draw behind Mathieu Nadeau’s net, Gélinas was foiled and the Beaucerons led 1-0. 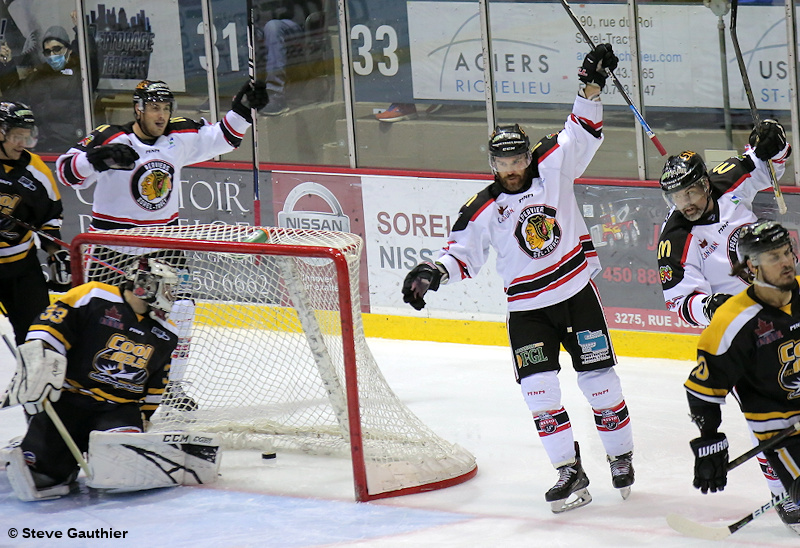 But it was short-lived. Buoyed by what had just happened, the Eperviers counterattacked and after a few saves from Girard, Olivier Caouette left the disc for Maxime Ouimet who came forward and scored with a low shot to make it 1 to 1.

Mathieu Dumas gets two penalties in a row, and on the second the power play of COOL FM gets underway and Maxime Guyon will knit behind Gélinas’ net. Guyon decides to surprise Gélinas by sneaking the disc behind his leggings and he scores his 3rd of the season and restores his team’s lead 2-1.

Outside the Victoria Street Amphitheater there would no doubt be a storm as the wind completely changed direction in the 2nd period. Christian Deschênes certainly spoke to his players as the Sparrowhawks came out of the locker room and charged vigorously. Goalkeeper Girard resisted as best he could, but 18 shots against him, against 3, what had to be done, happened. After 4 minutes of penalties in St-Georges, Charles Tremblay directs another shot at the net, and the puck bounces off Antoine Waked (4th) to finish his race into goal. After consultation with the officials, the goal is good. 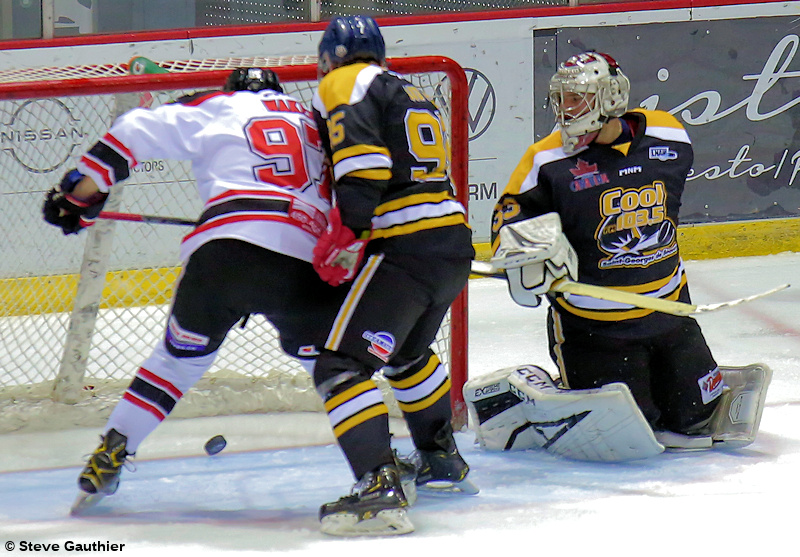 Then a bad pass by a Beauce defender, right into the defensive zone and intercepted by Olivier Hinse, leads to the equalizing goal when he hands the puck to Paquin-Boudreau and then to André Bouvet-Morrissette (8th), who doesn’t just have to finishing the job to give Les Éperviers a 3-2 lead. A nice Tic-Tac-Toe.

A bad change on the St-Georges side allows for a descent to two-on-one, and Dany Potvin will score his 2nd of the season with the help of Kevin Gadoury, and it’s 4-2 Sorel.

The most important save of the match is that of Marc-Antoine Gélinas in the 3rd period, against a good interaction between the players of an attacking trio St-Georges. Spectacular!

COOL FM will equalize with two goals from Alexandre Perron-Fontaine, his first of the season off assists from Tifu and Guyon at 8:20, the only goal scored on an equal footing for St-Georges. 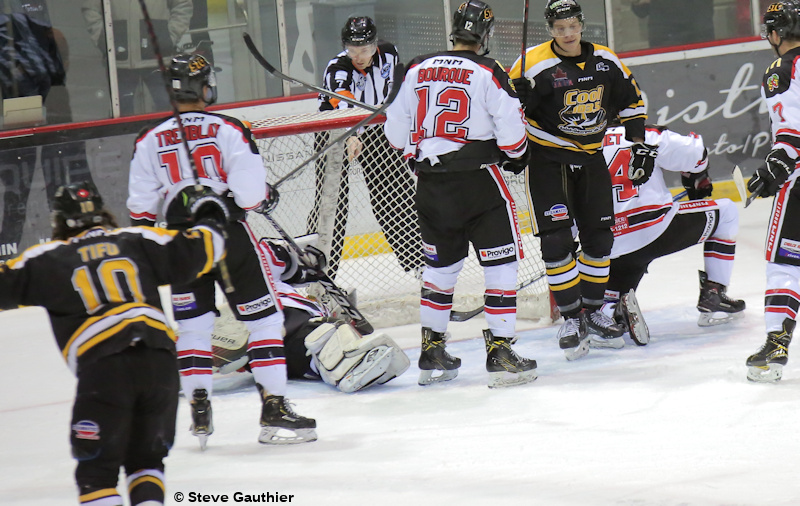 Then, a rather unusual situation, when Olivier Caouette, who had played a penalty almost without damage, leaves the penalty box too early and is given another penalty for “illegal substitution”. This penalty leads to COOL FM’s 4th goal, and thus the goal that made it 4 to 4, that of Simon Demers (2nd) with the help of Lacroix and Verret, on the power play.

Wanting to score and working hard all evening, Olivier Hinse saw his dream come true at 17 minutes and 23 seconds, still on 3rd, when André Bouvet-Morrissette gave him a “sul tape” pass to escape all alone and eventually foiling Girard between the leggings. 5 to 4.

And everything happens very quickly there. Saving his keeper and picking up a loose puck near the red line of the net, Antoine Waked tries a shot from one end of the ice to the other and the puck, well aimed, ends up in an empty net without a run. 6 to 4.

Les Éperviers gave up and continued the attack, allowing David Massé to finally score his first goal of the season, thanks to a Tic-Tac-Toe between him, Brodeur and Potvin. So it’s a final score of 7 to 4 for Sorel-Tracy, an 8th win that will put things back in order in the Sorel camp.

Special mention to Charles Tremblay who gave everything he had by running the 8 penalties against his team. Moreover, the star voters did not fail his efforts by awarding him the 3rd star of the game. Honorable mention to Tifu, Lacroix and Guyon for Serge Forcier’s team.

Throws: 39-30 in favor of the Sparrowhawks 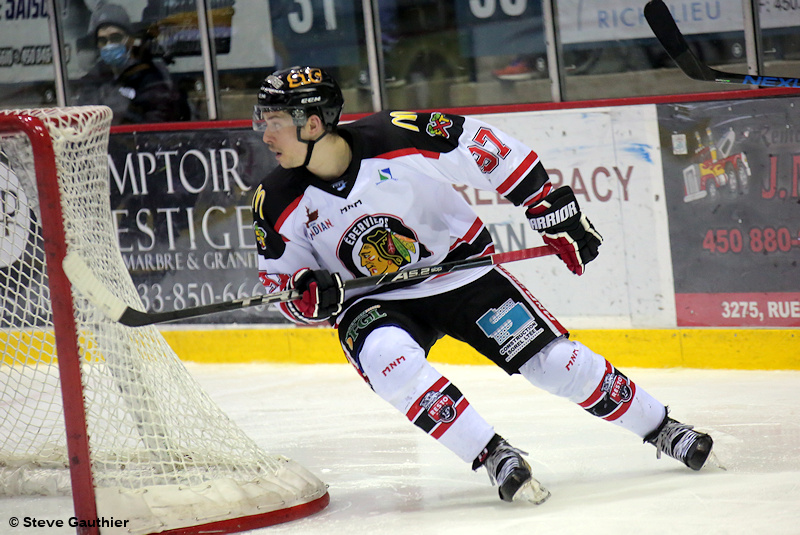 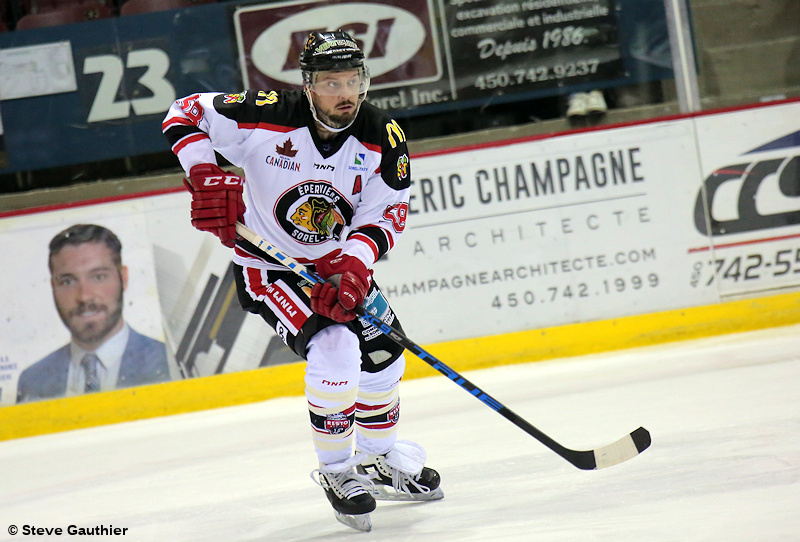