Jean-Pierre Augis, that’s it, your decision has been made. You are no longer co-chair of Saint-Pryvé…

“Yes, after 22 years of good and faithful service. It is a page that turns. It was not an easy decision but it is well thought out and I’m good in my head† Frankly, I started asking myself questions three years ago.”

“When defeat no longer prevents you from sleeping…”

Just after your exploits in the Coupe de France. Was it a highlight for you?

“No, it’s not linked. You have to be passionate to be president of a football club and I was passionate about it for 22 years. And today I’m still 73 years old. There were few signs.” When defeat no longer prevents you from sleeping, something has changed. I think it was some form of fatigue. I made the moves a little less. Eight hours by bus for a 90 minute game is a long time! And after that, with the Covid, I extended because I couldn’t drop the club. So today I am leaving my functions, but I remain a partner and supporter of the club.

“It’s true, but a season goes by so quickly. You meet new faces, it’s adventure, you don’t know where you’re going. It’s adrenaline too, because I was on the bench for 15 years until I co-operated for seven years. President suffered. But yeah, if you turn around, it’s been a great ride.”

premium The rise of the Saint-Pryvé . reserve

“I remember when I got to the club I joked that I wouldn’t leave until the club was in Ligue 2. The Ligue is missing, but there’s still the number 2. It’s not bad after all !”

Let’s go back to the beginning of the adventure. Why Saint-Pryve?

“I’ve always had the football virus. I was a player and president of the Pierrefitte-sur-Sauldre club. It’s Jean-Bernard (Legroux, the co-chair) who came to lend me a hand in 1999. We were in PL or PH, I don’t remember. We have risen quickly and have been playing in the French Championship for 18 years. It is wonderful what we have achieved at the club. When we went back to CFA2, there was nothing. The ground was not level. The town hall bought 40 m2 of land from a neighbor and deducted it from our subsidy!

Jean-Pierre Augis with Jean-Bernard Legroux, the winning duo from Saint-Pryvé.

“We almost built a stadium with the changing rooms, the stands, the lighting, the bar. You had to be passionate!”

Until what does the daily life of a club president look like?

“A football club, even in N2, is a business. It’s a second job and you have to juggle your business. I spent an average of three to four hours a day at the club, plus weekends! Not to mention the nights that you do not sleep, the end of the month you have to take care of. It’s a lot of time, but I assume a president must be present. And it’s also because I wanted to!”

“How much does football in Saint-Pryvé bring you?”

“I don’t want to talk about money. It’s true, passion can make you do anything, because you quickly get caught up in the game. But my association with the club has always been reasonable.” I never wanted to put my business or my family at risk for the club. It’s possible, we’ll do it, it’s not possible, we won’t. With Jean Bernard (Legroux), we are on the same wavelength. In retrospect, you should know that even in N2, if there is no money, there is no team. I will always remember the question of a former sports assistant at Saint-Pryvé who asked me the angry question: “How much does football bring you to Saint-Pryvé?” “I can only tell you how much it cost me and all the joys it brought me!”

“Eighteen Payslips”
How would you rate the evolution of amateur football over 22 years?
It’s getting more and more complicated. In N2, it is pro level. In Saint-Pryvé there are 21 paid players, eighteen pay slips. Fifteen years ago it was five or six. All players have agents and have become demanding. Presidents should be too, setting boundaries. There are also mentalities. If some young people today tell you “I’m no longer motivated” when football is their job, you wonder. With 73 we can understand, but not with 20!

The relationship with the municipality has never been better…

“Yes, it’s always been complicated. Just a number coming from the DNCG (Directorate of National Control and Management)† In N2, a club receives an average subsidy of 228,000 euros. We have 42,000 euros. We’re lowering the average!”

Stability is one of the hallmarks of Saint-Pryvé, especially at the level of the carriages…

Yes, if I remember correctly, there must have been six coaches for 22 years: Jacky Froissart, Mario Costa, Fabien Croze, Vincent Bordot, Reynald Pédros, Mickaël Ferreira and Baptiste (Ridira)† And one of our successes is to have trusts or promotes these young coaches† We could have taken experienced guys, but we took that risk and it paid off.”

What are your best memories in these 22 years?

“The first climb to CFA2 was very strong for a club like Saint-Pryvé.”

“Some envied us and announced it would just be a flash in the pan. We were nicknamed the jet set of football! Eighteen years later, we’re still here.”

“After that, of course, there are the epics in the Coupe de France. We played Caen, Troyes, Rennes, Monaco where we fill La Source, you meet Fabregas, Ben Yedder. Saint-Pryvé made headlines in the national media. It is gratifying and it is the reward. But the game against Toulouse with that goal at the last minute was also very strong.” 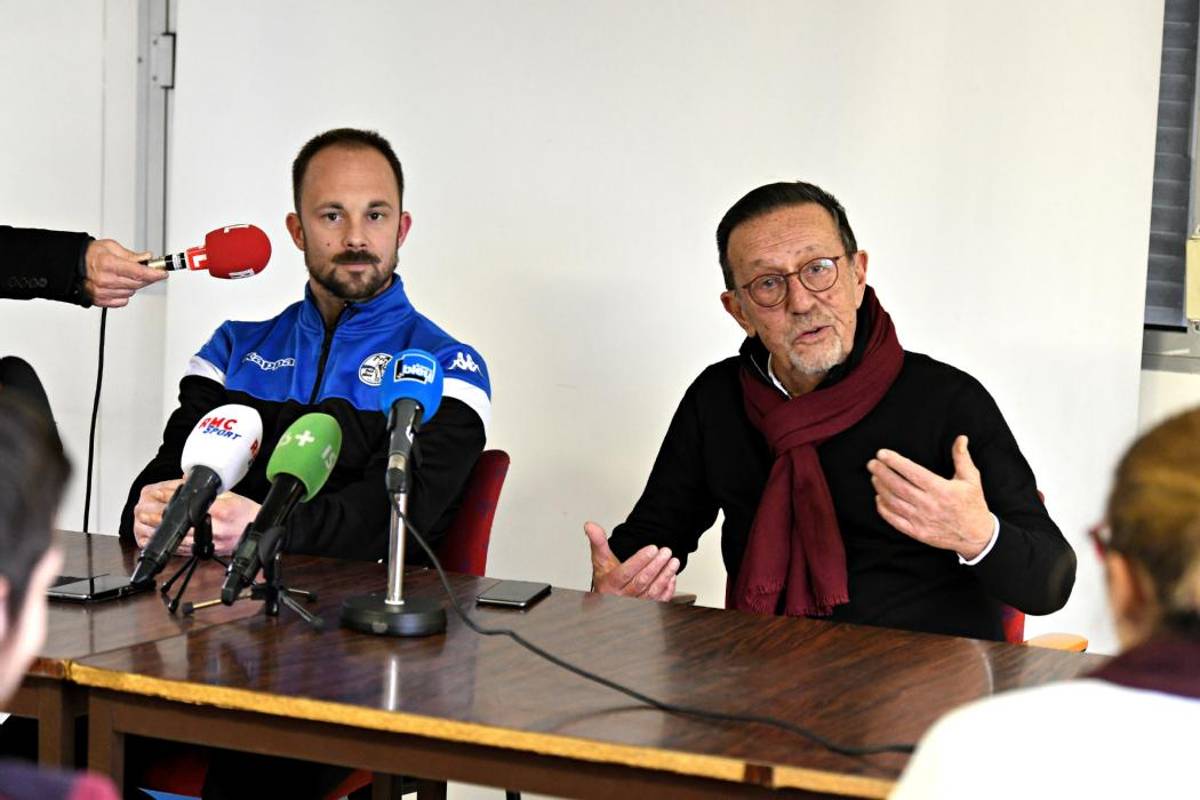 Before the match against Monaco with the interview of the national media.

“Even if I only keep the good ones, the two failed climbs on the last day were hard to live with. Especially in Angers. We were leading 0-3 at half time. I still remember the journalist from the representative who says to me: “it’s good”. I told him to wait. Then we miss the 0-4 penalty, we lose 4-3 and we don’t go up.”

“There are plenty of other things to do”

How will you spend your free time now?

“That’s the question my wife and my secretary are asking me! Early next season, I have to admit, I’m definitely going to miss all this. I have to. But there are plenty of other things to do, travel, see matches, in Saint -Pryvé, Orléans or elsewhere, quiet, without pressure. And then my wife has been going to the cinema alone on Saturdays for 22 years. I will be able to accompany her, but, I still look at my cell phone to know the result of Saint-Pryvé!”

Emotion for the last home this Saturday
First there is the opponent for this season’s end at home, next Saturday (6 pm), in the Grand-Clos stadium. And not just any one, because Saint-Pryvé will face Versailles, impressive leader and semi-finalist of the Coupe de France. “His last defeat in the league (in Caen) was on November 20. So we have… a nice challenge to take onLaunches Baptiste Ridira, the Pryvatain coach who will rotate his workforce with the return of Jabi, Diawara, Ramos and Cibert.
“But this match will be emotionally charged above all,” adds Baptiste Ridira. Besides Jean-Pierre Augis, it will also be the der for Grégoire Becker, the physiotherapist, but also for Fabrice Seidou, “my captain for six years”, and ten years with the club.
Free entrance. Saturday 21 May, 6 pm, Grand-Clos stadium in Saint-Pryvé.