(Jean Doyon) – The Thetford Assurancia eventually took a final win in these 2022 LNAH play-offs as, after knocking out the Sorel-Tracy Sparrowhawks in four games during the semi-finals, they did the same to the Petroliers du Nord de Laval in the final , also winning in four games, thanks to a 7-4 victory over the Colisée de Laval.

Only Rivière-Du-Loup managed to beat them once, in the quarter-finals, with a score of 2-1 in overtime at the Premier Tech Center in Bas-St-Laurent. De Assurancia concludes a dream season with only 7 defeats during the regular season. 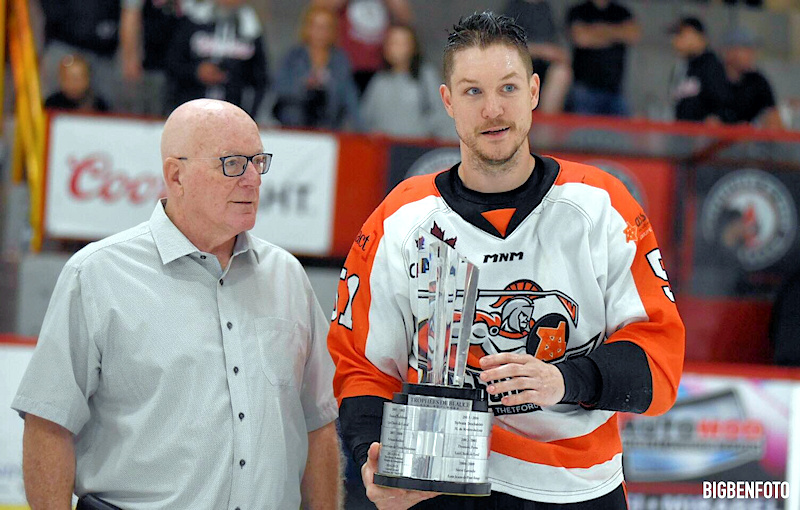 This is the third trophy for the Thetford organization since 2015. At the end of tonight’s game, Assurancia defender Gabriel Lemieux was voted Player of the 2022 Series, and he is an excellent choice. †

In tonight’s game the Petroliers got off to a good start, but it was clear that Bobby Baril’s men were thirsting for victory and at one point they were all over the ice. Laval’s attack was not to be outdone though, they gave it all, except Assurancia’s highly airtight defenses only let crumbs through.

By the last 4 minutes of the 3rd period, and the goalkeeper removed, Pierre Pelletier’s team spent a lot of time on offense in the Thetford area and hoped to get back into the game, but the visitors scored two goals in a abandoned cage, which always assured victory a little more.

History of the game

From the first face-off of the game, Danick Paquette, who was back in line, was given a two-minute minor, which will have no consequences.

Then it was Assurancia’s turn to take two penalties and work three against five. Their special unit trio performed flawlessly and even as Francis Beauvillier came out of the penalty area, Pierre-Luc Lessard saw him give the pass and the latter escaped. Francis Beauvillier opened the score in the meeting for the visitors at 6m19, shorthanded and defeated Francis Leclerc with a perfect shot.

At 7.35m, Thetford added another on a two-player descent, when Alexandre Goulet had managed to move the defender enough to make a pass from the front that hit Pierre-Maxime Poudrier’s skate and went into the goal .

The Petroliers’ answer, when Jean-Michel Daoust does well on the forecheck, recovers the disc and passes from behind the goal to Nicolas Poulin, who scored with a one-timer at 9m17. For Poulin it was his ninth of the play-offs and the first of his two goals tonight.

At 14m03, Yann Joseph wins the face-off in the opposing zone, Joey Ratelle runs on the puck and only passes to Alexandre Goulet in the groove. Goulet will come to mark the 3rd of Bobby Baril’s men.

The impressive prediction of the Orange and Black continues and they make Danick Paquette pay the price that the puck loses behind the net of his goalkeeper, Marc-Olivier Mimar, who delivered four assists tonight, picks up the precious and puts him back in front to Dylan Labbé who scored the 4th from Thetford. After 20 minutes of play it is 4-1.

In the 2nd period, coach Pierre Pelletier sent goalkeeper Martin Ouellette to relieve Francis Leclerc for the Oilers goal. Nicoals Poulin did not let go and the first goalscorer of the play-offs scored his 10th, when Yan Sauvé saw him alone in the middle of the ice he gave him a long pass and Poulin scored the 2nd for the Petroliers.

Pierre-Maxime Poudrier will register the 5th of the Assurancia on passes of Joseph and Mimar at 15m20. and with less than five seconds left in 2nd place, Alexandre Goulet made a good trip past the local keeper, but Martin Ouellette made a spectacular save and kept his team in the game. However, it is 5-2 after 40 minutes of play.

At 3m06 in 3rd Brendan Hamelin pushes the disc onto the ramp, Yann Sauvé intervenes to pass to Jean-Michel Daoust who scores on the return at 3m06. With 3m55 to go, Laval withdraws his goalkeeper.

Danick Paquette scores the 4th goal for the Pétroliers (Sauvé, Medley), but Dave Labecque and Francis Wathier will complete the score with a goal each into an empty net for a final score of 7 to 4.