As the fashion capital, Paris has just welcomed the new Smart #1 in its production version. This is an opportunity for us to present to you this 100% electric SUV, which marks the revival of the Mercedes-Benz Group brand.

A few months ago, in September 2021, we invited you to discover the Smart Concept #1 (pictured below) during a first presentation also organized in Paris. From one studio to another, two #1 Smart SUVs were present in the capital today, including the “Launch Edition” version.

Smart represents a certain paradox in the car market, knowing that the German manufacturer entered the era of 100% electric at the beginning of 2019, by deciding to market only the EQ fortwo and EQ forfour. Previously, it was mainly the thermal Smart fortwo that was commercially successful. So, Smart may have been too quick to go electric by offering these two fortwo and forfour thermal offers in a “battery-powered” version, without offering any real new models. The Smart #1 therefore, as the name suggests, marks the beginning of a new electric era for Smart, which is collaborating with the Chinese group Geely, as part of the development of its new SUV. 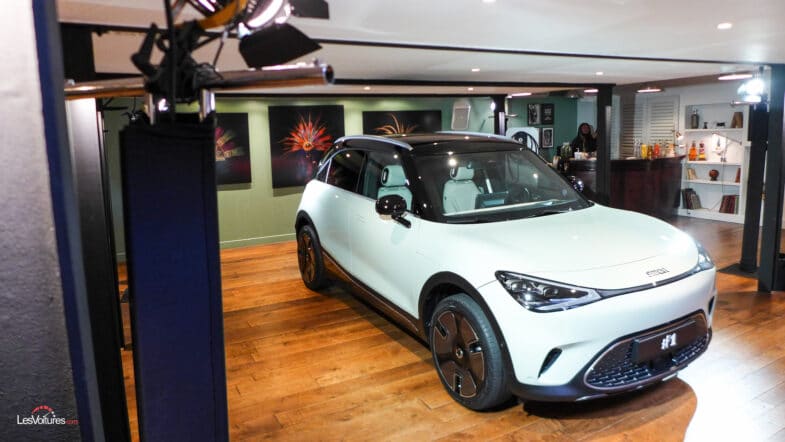 For the most part, the Smart #1 retains the style of the concept car mentioned above. At the front, the optics are larger and we notice the presence of two openings at the height of the front screen. Still at the front, the matrix optics are connected by a light strip. The “look” of the Smart #1 is somewhat reminiscent of that of the Volkswagen electric range, such as on the ID.4 SUV. 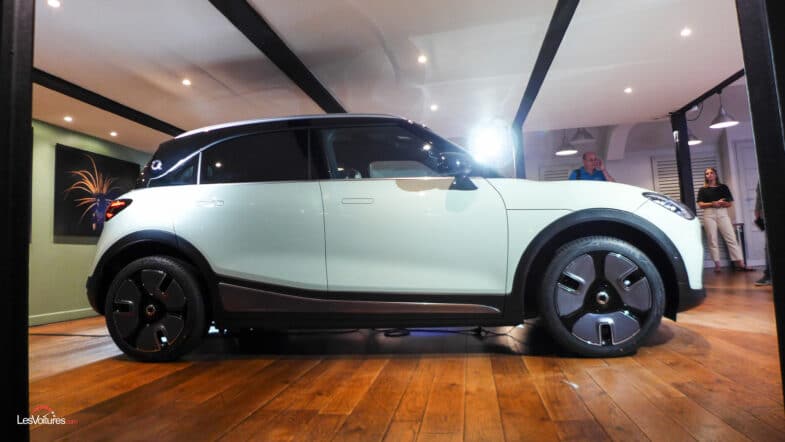 The sides of the Smart #1 are both highly refined and “dressed” with elements we would describe as “chic”. The beautiful floating rendition of the roof, seen on the concept car, has been remarkably preserved, while the new Smart SUV on the production version reveals doors with classic and non-antagonistic openings, at a cost of manufacturing. Likewise, the concept car’s camera mirrors are also disappearing from the final version of the Smart #1. However, the recessed handles are retained and the doors are frameless. 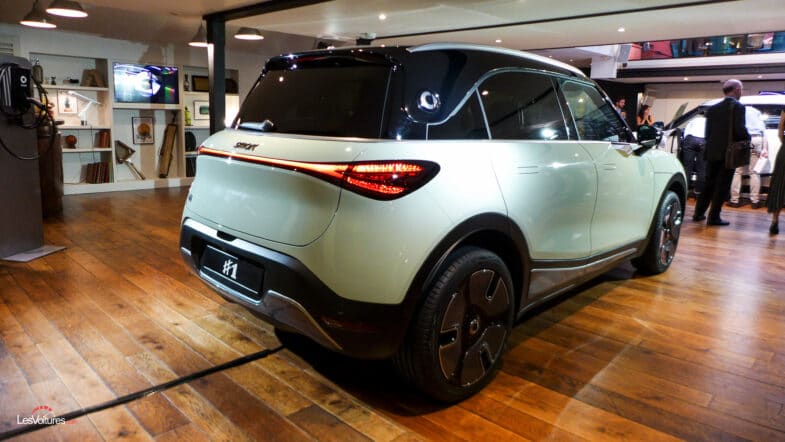 The rear of the Smart #1, for its part, is almost identical to that of the concept car with a curvaceous rendition, which this time links to the latest Mercedes-Benz productions. It should be noted that the electric SUV with two-tone “Champagne” gold treatment presented in this topic is the launch version “Launch Edition” limited to 1,000 copies. Please note, for the French market one hundred copies of this “Launch Edition” (pictured below) should be released. 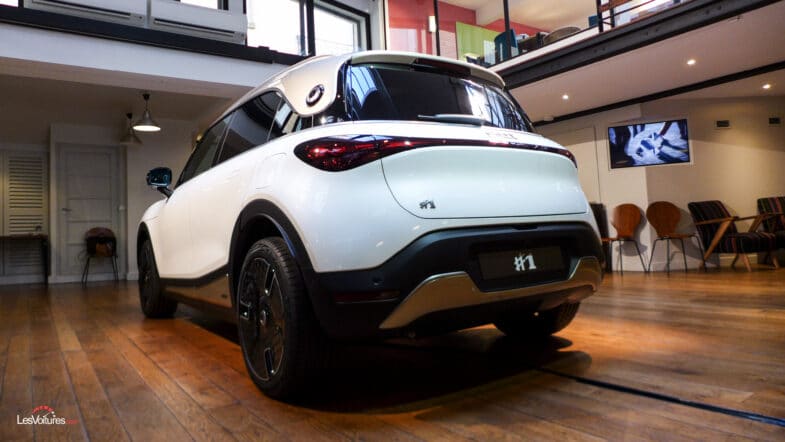 Let’s enter the Smart #1 to discover a high-tech and cozy environment that surprises, in the good sense of the word. The dashboard is one with a floating center console that offers the SUV even more interior space. A large panoramic roof accentuates this feeling of large living space for cars, as the choice of materials and the different compositions are resolutely top-class. At the bottom of the photo, the “Launch Edition” version once again gives prominence to gold inserts and white for the trim. 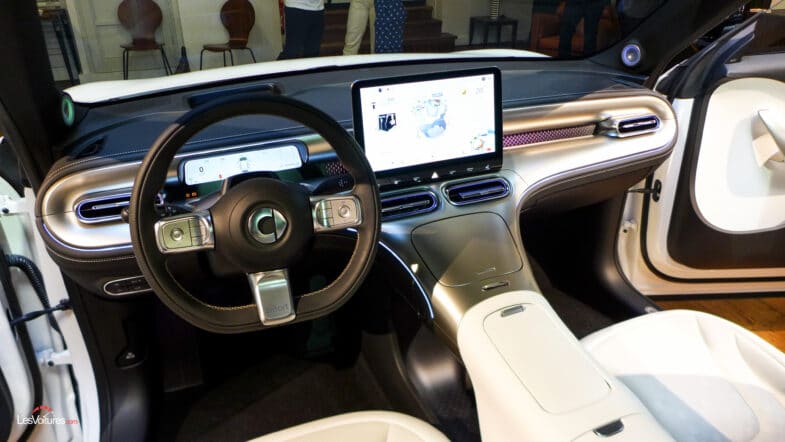 In terms of on-board equipment, the new 100% electric Smart SUV offers its driver a small rectangular plate measuring 9.2 “. Depending on the finishes (“Pro”, “Premium” and “Launch Edition”), a HUD (heads-up) display accompany the digital instruments. In the center of the dashboard is a 9.2” touchscreen, regardless of the finish. Of course, the Smart #1 is ultra-connected and equipped with multiple driver aids of the latest generation : adaptive cruise control, lane assistant, etc. 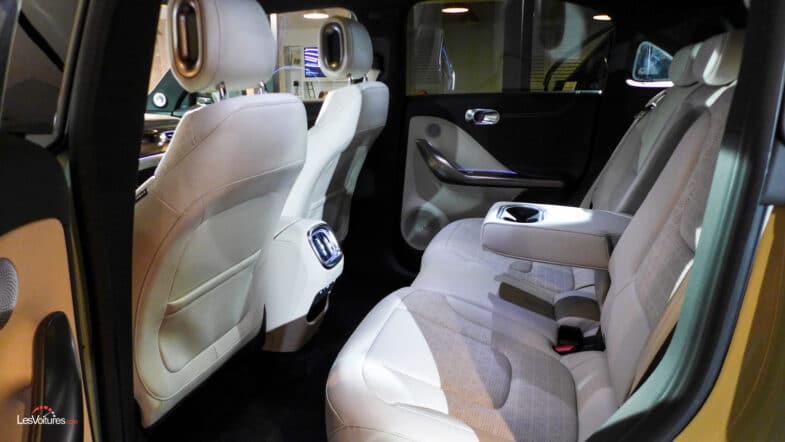 Let’s get to the power, it seems to be there clearly. Modular to your liking, the Smart #1 notably has a 2/3-1/3 rear seat that slides over 13 cm. Suddenly, the cargo volume of the SUV is announced between 323 and 411 l. There is additional storage space available under the boot floor. At the front is a mini-box to place the charging cable. 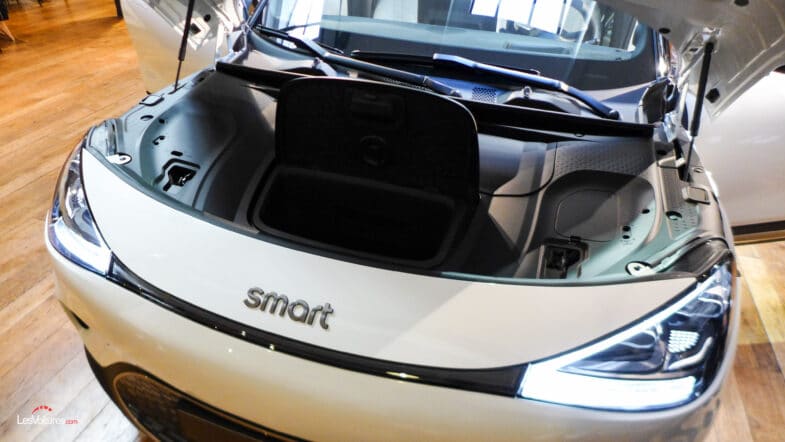 The Smart #1 weighs 1,820 kilograms empty and is powered by a single electric machine on the rear axle. The maximum power of the German electric car is 200 kW/272 hp for a maximum torque of 343 Nm. These data are very interesting compared to the current electric models available on the electric car market (Peugeot e-2008: 100 kW/136 hp ). The Smart SUV is powered by a battery with a capacity of 66 kWh, for an official and approved driving range between 420 and 440 km in WLTP. As for the performance of the Smart #1, they are 6.7 s for the exercise from 0 to 100 km/h and 180 km for the maximum speed. Other less powerful engines or 2 engines may be current in a few months. 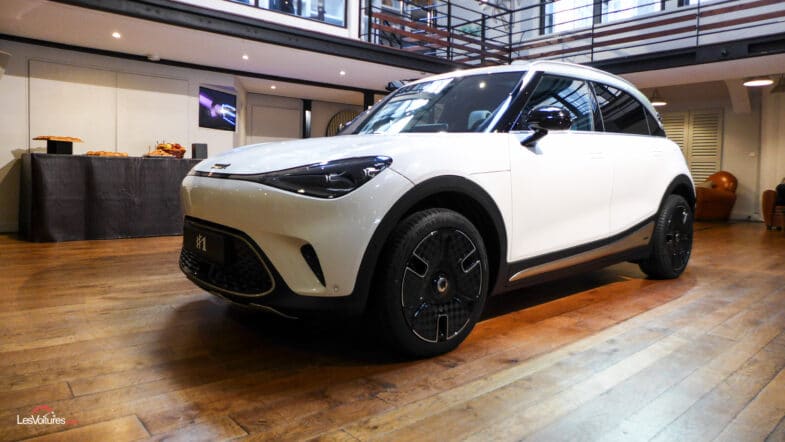 In terms of charging, Smart indicates that it is possible with a power of 22 kW (alternating current) and 150 kW (direct current). In the first case, it takes less than 3 hours to refuel with electricity. 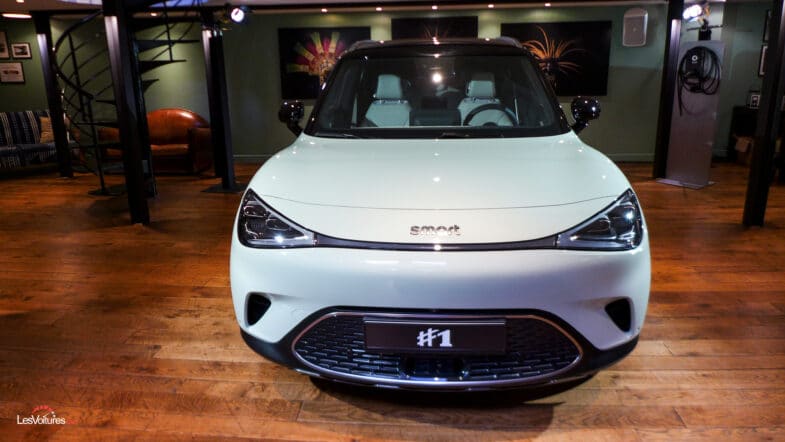 Finally, we will have to wait, probably until early 2023, to see the Smart #1 arriving on our streets. With this first 100% electric SUV, we can imagine that a real fashion effect will be in the news in a few months. Affair to follow in the chic neighborhoods of Paris, and everywhere else.