Skip to content
Shortening the distances students travel to access education, reducing pregnancies in schools and resolving the issue of guardians, this is the vision of the President of the Republic Alassane Ouattara. And to make this vision a reality, Mariatou Koné, Minister of National Education and Literacy, went to work immediately after his reappointment in the government of Patrick Achi 2 .

Education is an investment for her, and that includes the challenge of quality. On May 5, 2022, she went to the construction sites to check the progress of the work of the local colleges in the towns of Eticoon, Moronou and Labokro. This, to reassure national and international opinion, is the opening of about forty secondary schools at the start of the 2022-2023 school year. According to her, this first day is positive. However, some problems have been observed in one village. But the minister remains optimistic. This visit is part of the second Debt Reduction and Development (C2D2) contract.

First stage of the visit, the prefecture of Tiassalé, where the minister proceeded to pleasantries. After that, the course was set for the Eticoon college on base 2 built on a site of 3 hectares where the minister was received by a strong delegation led by the prefect. Cost of works 159,733,802 F Cfa. Realizing the state of progress, women’s education carried the message of the President of the Republic, Alassane Ouattara. “The head of state wants colleges to be closer to the people. He wants the colleges to come to the people. He would have liked to see as many schools as there were villages to promote the education of children, especially young girls.” She continues her point, affirming that young girls educated by their parents study better and are less attacked. This is the whole point of local colleges. The minister did not fail to greet the French development agency that, through the C2D2 and its partners, allows the realization of local colleges.

The choice to visit Eticoon was made quickly by the minister because, she says, the primary school of the village with 501 students achieved a success rate of 97% at Cepe. “I want to congratulate the Eticoon education community, because having this high percentage means you are responsible citizens for a quality school,” she acknowledged. To complete the stage, the minister offered an amount of one million FCFA. Following in his footsteps, Konan Yao Rémi translated the village’s acknowledgment to the minister for the upcoming inauguration of the local college of the said village. He offered the minister a ram and blankets. As a reminder, the minister had offered a youth center to the said place under her former ministerial portfolio.

The second leg of the journey of the head of the Ministry of National Education and Literacy is Moronou, a village in the subprefecture of Kpoubo, department of Toumodi, in the region of Bélier. Here too, the success rate of the students at Cepe is impressive: 97%. The local college was built on an area of ​​nearly 5 hectares, at a total cost of 159,733,802 CFA francs. Konan Symplice, President of Moronou’s Mutual Economic and Social Development, thanked the minister for what he describes as a masterpiece and architectural gem. He also recalled the actions taken by the minister on their behalf. This allowed them to take advantage of a youth center with a capacity of 300 places. Fofana Adama, Regional Director of National Education and Literacy, welcomed the Yamoussoukro Drena hosting local colleges. He also promised to do everything possible to keep the school afloat, for a quality school. On behalf of the community, he offered the minister a ram and blankets from the country of Baoulé. The minister also welcomed the work done in Moronou. She praised the operator for meeting the deadline and encouraged staff to do their part to achieve 100% enrollment and literacy rates in Moronou. Just like in Eticoon, the minister let her heart speak by offering one million FCfa to the administrative, usual and school community.

Next step, Labokro. A village located in the Attiengouakro sub-prefecture that has achieved a 100% success rate with Cepe. Once on site, the minister was very disappointed to see a construction site that was still in an almost embryonic stage. When Minister Mariatou Koné saw the state of the work, she raised her voice angrily and demanded that the operator meet the deadlines. Addressing the people, she confided that this is why the President of the Republic has asked the ministers to be ministers in the field and not in the office. Because according to her, her vision is to allow local colleges in every tribe, even in every village. “Our desire is to see 95 new local colleges delivered by the start of the next school year to meet the vision of the head of state,” she said, emphasizing her urgent desire to see this local college project implemented. As for the teacher shortage, the minister assures that she is doing everything she can to ensure that this difficulty is a distant memory for the population. 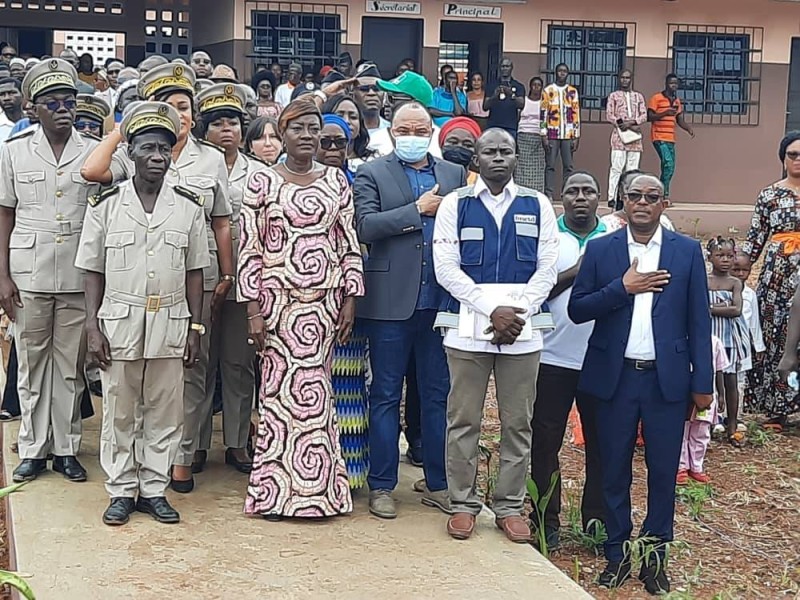 In addition, the local health insurance company has expressed several concerns, including the Coges bonus, which has still not reached recipients until this time of the academic year. To this the minister replied that, once in Abidjan, she would handle the matter personally.

Finally, to end her day, the minister went to the construction site of mixed high schools 1 and 2 to relieve the congestion in the science high school and above all to allow the rehabilitation with all the deserved amenities. The work has been entrusted to Egyptian operators who will construct fully prefabricated buildings on 10 hectares. Seeing the progress of the work, Minister Mariatou said with relief: “Ivory Coast is really working with President Alassane Ouattara, also the national education system, with construction sites for colleges and local secondary schools across the country”.

The point of these local branches was also made at the end of May 5 by the coordinator of the C2d education training project. He ensures that the deadlines are respected by the operators who will have to deliver the facilities by the end of July 2022. 37 other colleges are planned for the start of the 2023 school year. for the third week of August 2022. According to him, operators understand only two languages: their profit and pressure. “Today there is strong pressure on companies to complete their work. The ones that couldn’t fit the timing at all were terminated. We have the support of the landlord, the French Development Agency, the Government and the National Bureau of Technical Studies and Development (Bnetd), which takes care of the project management, and of course the technical secretariat of C2d which is linked to the Prime Minister,” he assured. †